Who are the Donauschwaben?
The Early History: 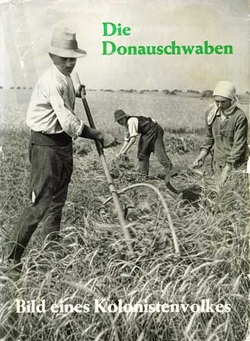 The Donauschwabens , or Danube Schwabians are ethnic Germans who settled the lands of southeastern Europe in 17th and 18th centuries.  These lands comprise what became Yugoslavia, Romania , Czeckoslovakia, and Hungary.  During the time of the Donauschwaben’s settlement, these lands had been only recently freed from 150 years of Turkish Ottoman Empire rule, and after many years of war, were devastated and largely depopulated.  The victorious Austrian Hungarian Empire of the Hapsburg Monarchy, wished to quickly settle the lands with settlers in order to establish a barrier against further Turkish invasion.  Even with the native Hungarian and Serbian peoples returning to the area, the empire felt the need to entice peoples from all over its empire to adequately populate the area with its subjects.  The Monarchy especially wished to settle Germanic peoples in order to establish a Roman Catholic foothold in the area and bring the agricultural skills of these people to the region.  The promise of free land, tax exemptions and opportunity, enticed many Germans to make the journey down the Danube River from their German, Schwabian origins along the river’s shores.  These settlers arrived by barge and quickly set to turning the land into  prosperous  farmland.  The settlement occurred in waves, named after the monarch that intiated the settlements from 1718- 1787.  The first wave, designated as the “Karolinische Ansiedlung” or Caroline Colonization, occurred between  1718-1737.  This first wave of settlers endured the attacks of the Turks, wishing to regain the land,  resulting in many deaths.   From 1744-1772, a second colonization occurred, called the “Maria Theresianische  Ansiedlung” or Maria Theresian Colonization.  From 1782-1787 a third and final colonization occurred, the “Josephinische Ansiedlung” or Josephine Colonization.  These pioneers created over 800 villages, towns and cities that thrived because of hard work and the desire for a better life.

The Impact of World War I:


Living peacefully alongside other ethnic groups, the Donauschwaben’s communities and farms flourished,  keeping their language, traditional dress, religion, and culture largely intact.  By 1900, over 2 million Donuaschwaben lived in southeastern Hungary.  World War I brought the first of big changes to these communities.  As a result of the Treaty of Trianon in 1921, The Austrian-Hungarian Empire, Hungary, was split into the countries of Austria, Hungary, Yugoslavia, Romania, and Czechoslovakia.  Without moving or a voice in the decision, people became citizens of a new country.  The Germanic Donauschwaben went from being a majority ethnic group to becoming minority ethnic groups in many of their new countries.  This change caused the Donauschwabens to form German cultural societies or unions in order to preserve their ethnic identity.  Communities also set up German Language schools in order to preserve their ethnic language.  Still, life continued as before, with little change in many of the small towns and villages, especially in rural areas.

Link to Treaty of Trianon Images and Maps:

The Impact of World War II: 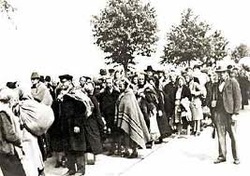 Death march of Bruenn. German Expellees.
The rise of Nazism in Germany and World War II brought unwanted attention to the Donauschwabens of southeastern Europe, especially the Banat and Batschka regions of Yugoslavia.   The Nazi party reached out to the Donauschwaben cultural groups, playing on their ethnic “German” identity, in order to gain support in the countries that were allied against  Germany.  Although many Donauschwabens considered themselves “German”, the Nazi’s interestingly enough considered the Donauschwaben more as pawns than equals to German nationals.  Still there were some that enthusiatically supported the Nazi war effort.  In 1941, the German army invaded and occupied Yugoslavia.  Because of their German identity, Donauschwaben men as young as teens  were either conscripted or forcibly drafted into the German army.  As a reward for their ally, Germany returned the regions of Banat and Batschka to Hungary.  The citizens of these areas  were again under Hungarian rule.  This reversal was not viewed kindly by the ethnic Serbians of Yugoslavia, who began a guerilla resistance group called the Partisans.  The  Partisans, lead by Josip Broz, known by the name “Tito”, were aligned with the communist party and supported by the Soviet Union and Allied Nations.  The Partisans with the support of the Allied forces, were instrumental in the defeat of the Nazis in Yugoslavia.  The Partisans gained control of Yugoslavia and created the Federal People’s Republic of Yugoslavia under the rule of Tito.


Link to Information about Josip Broz, Tito.  No mention of the disposal of ethnic Germans is made on this or other websites about this period of Yugoslavian history.:
http://cidc.library.cornell.edu/dof/yugoslavia/yugo.htm

As  the Potsdam Conference made decisions about Germany’s boundaries and the German populations living within the newly formed boundaries of Poland, Czechoslovakia, and Hungary, Yugoslavia was granted the right to determine the future of ethnic Germans within its borders.  In 1945, Yuogoslavia stripped ethnic Germans of their rights, citizenship and property .  A stream of Donauschwabens by train, wagon and on foot  began to evacuate through Europe to the relative safety of Austria and Germany.  These refugees arrived to a decimated Germany, ill equipped to deal with this additional population and unwanted by German nationals.  Those that remained behind, certain that in the end all would return to normal, were systematically rounded up and sentenced to either Soviet labor camps or extermination camps within Yugoslavia.  The end of World War II saw nearly 15 million ethnic Germans displaced and nearly 2 million killed.  The question arises that as the Allied forces were condemning the liquidation of Jews and others by the Third Reich, how could they tacitly support the liquidation of ethnic Germans by Tito’s Partisans?